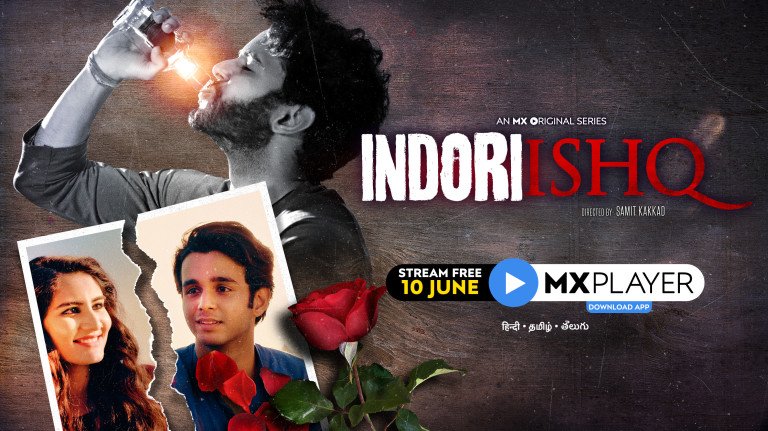 While there are plenty of OTT platforms in the country and one can find the content of all genres on these but simple mushy love stories. MX Player is planning to come out with a new original – Indori Ishq which deals with a small-town lover boy finding out that he is being cheated on by his girlfriend, which puts a full stop to his fairytale. MX Original Series ‘Indori Ishq’ takes us through this lovelorn GenZ aashiq’s journey of unrequited love. Directed by Samit Kakkad, this 9 episodic drama stars Ritvik Sahore and Vedika Bhandari in the lead. All episodes of this web series will be available from 10 June, 2021.

In a hatke twist, this narrative sees the man as a victim in this relationship and the web series also explores how the rules of commitment and being faithful in a relationship are so very drastically different for both sexes. After the end of his school days, Kunal (played by Ritvik Sahore) leaves his hometown Indore and moves to Mumbai.

He considers himself the happiest man alive – he is in a relationship with his school time crush Tara (played by Vedika Bhandari), he has secured a seat in a top Naval College and his parents are incredibly proud of him. Life, however, turns upside-down when Tara dumps him for another guy and Kunal is pushed into a world of pain, insanity and madness.

Speaking about the same, Ritvik Sahore said, “If you notice, the rules of love are different for men and women. My character Kunal is ridiculed for ruining his life over Tara, who has been unfaithful to him. But had the tables been turned – the world would have berated him for ruining a girl’s life. I believe that in a relationship, there are two equal halves who need to make it work and the blame or the responsibility should be equally distributed. At the core of it, this is a story of innocent young love and promises that were meant to be broken.”

A hot game summer: mark your calendars for the must-play video games of the season

Vadivelu on Vivekh: ‘Every word that he uttered was impactful’